CSC – IT Center for Science will lead an international partnership to deliver the Climate Change Adaptation Digital Twin awarded in the call for tenders issued by the European Centre for Medium-Range Weather Forecasts (ECMWF) as part of the implementation of Destination Earth, the flagship initiative of the European Commission. The CSC proposal brings together excellence centers from across Europe specializing in climate science and services, Earth system modeling, and supercomputing to deliver an innovative climate information system supporting the European Union's climate adaptation efforts.

The agreement to develop the Climate Change Adaptation Digital Twin (Climate DT), the second high-priority digital twin of Destination Earth (DestinE), has been signed by CSC – IT Center for Science Ltd. and ECMWF on 06 October 2022.

CSC will collaborate with 12 other organizations, ranging from National Meteorological Services and supercomputing centers to some of Europe's top climate research institutions, to provide a configurable climate information system performing multi-decadal global climate simulations at an unprecedented spatial resolution. The added value of the system for society will be demonstrated through use cases from five climate adaptation impact sectors.

– We are proud to be selected as the prime contractor to implement the Climate Adaptation Digital Twin together with our trusted partners across Europe. This project is a unique endeavor in high-performance computing for its societal impact as well as for its ambition level. Our contract consortium features world-class expertise in exascale supercomputing programming methodologies as well as in exascale climate science and implements the solution using the leading supercomputer platforms in Europe. The LUMI supercomputer is one of the most powerful and advanced supercomputing platforms in the world, and well positioned to host the digital twin due to its computing power and data processing capability, combined with versatile value-add features, says Dr. Pekka Manninen from CSC - IT Center for Science, the principal investigator of the ClimateDT project and the Director of the LUMI supercomputer.

The DestinE is an ambitious initiative of the European Union aiming to create a highly accurate digital twin of the earth system implemented by ECMWF, the European Space Agency (ESA), and the European Organization for the Exploitation of Meteorological Satellites (EUMETSAT).

A new generation of Earth-system models underpinning the Climate DT

A new generation of high-resolution Earth system models will constitute the core of the Climate DT. Two earth-system models used in Climate DT are ICON from a joint venture between the Max-Planck Institute for Meteorology (MPI-M) and the German Meteorological Service Deutsche Wetterdienst (DWD) and ECMWF's Integrated Forecasting System (IFS) coupled to the NEMO ocean model developed by the NEMO Consortium and, alternatively, to the German Alfred Wegener Institute's FESOM ocean model.

ICON and IFS-FESOM/NEMO are already being developed under the EU's Horizon 2020 nextGEMS project (2021–2025) and these activities have demonstrated that they are the only European models presently capable of running global coupled simulations at scales finer than 5 km, in the atmosphere, in the ocean, and over sea-ice with sufficient throughput on state-of-the-art supercomputers.

– Destination Earth relies on projects like nextGEMS to prepare the science for the next-generation, high-resolution Earth-system models that will form the core of the digital twins of Earth. This convergence of Horizon Europe funded, cutting-edge research and Digital Europe funded technology capability provision by DestinE defines a new step in creating value for society, says Peter Bauer, the DestinE director at ECMWF.

Both models will be adapted and optimized to run efficiently on two of the most powerful European supercomputer infrastructures in the EuroHPC Joint Undertaking network:
•    LUMI, operated by CSC-IT Center for Science in Finland
•    MareNostrum 5 of the Barcelona Supercomputing Centre (BSC)

– High-performance computing is a key technology for the research aiming at reaching the green deal goals. At CSC, we are fully committed to the Destination Earth program and happy to be able to provide our competencies in supporting it, states Kimmo Koski, Managing Director of CSC – IT Center for Science.

The Climate DT introduces the idea of a generic state vector, a standardized set of information describing the state of Earth system that will be common to both Earth-system models, allowing interoperability and setting a common information feed for applications from impact sectors. The applications will therefore have access to the entire Earth-system simulation state creating unprecedented opportunities for extracting information relevant to impact sectors.

The Climate DT will demonstrate its added value for applications of societal relevance by developing early prototype use cases together with users from five climate adaptation impact sectors: urban environments, hydrology, hydro-meteorology, energy, and forestry. It will thus create a basis for an interactive information system tailored to the user needs that can be scaled up for broader use in future phases of DestinE.

– The DestinE Digital Twin for Climate Adaptation uses the recent breakthroughs in the connection between climate modelling and the production of user-relevant climate information. The recent developments in global climate modelling and high-performance computing and a better understanding of user requirements will allow those vulnerable to climate change to contribute to the design of the digital twin. This unprecedented real-time user interaction with the climate models through the digital twin represents a paradigm shift in the provision of climate information, emphasizes Francisco J Doblas-Reyes, Earth Sciences Department Director, Barcelona Supercomputing Center.

European excellence brought together for an unprecedented challenge

CSC operates the EuroHPC supercomputer LUMI, one of the world's fastest and most efficient machines, with a sustained computing power of 375 petaflops, hosted by the LUMI consortium.
To make the most of the collective European expertise, CSC is teaming up with top-level partners covering all the aspects necessary to create the new capability: 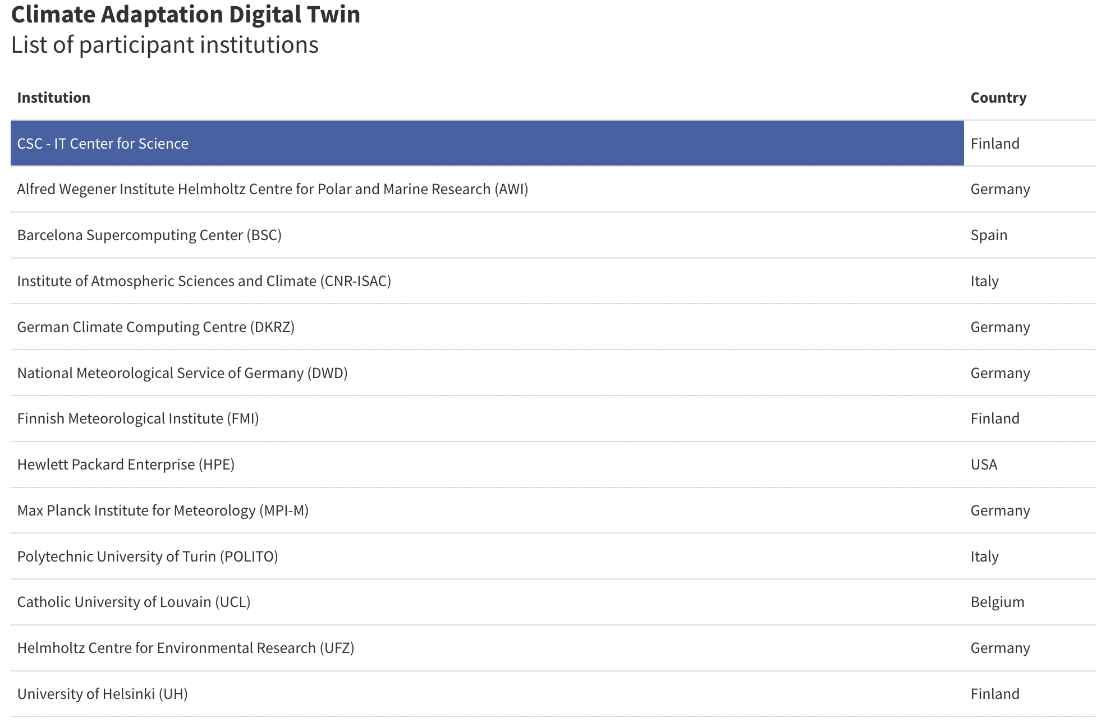 Our society is becoming more exposed to climate change with yet unknown regional effects. Current climate simulation systems struggle to provide the vital information needed to derive climate change adaptation and mitigation measures at these scales.

– By enabling simulations at an unprecedented scale, DestinE's Climate and Adaptation Twins will provide a more physical and useful representation of the Earth system. DestinE will transform our ability to anticipate the consequences of global warming. It will also put Europe at the forefront of efforts to explore how information technologies can immerse people in new digital landscapes — for good, says Prof. Björn Stevens Managing director of Max Planck Institute for Meteorology (MPI-M).

With DestinE, the European Union takes a decisive step to create a new generation of climate information systems building on the latest scientific research and enabled by novel digital technologies. This information system will provide more detail and accuracy and introduce configurability and user interactivity to enhance society's uptake of the information. It will thus complement existing services like the Copernicus Climate Change service or the Coupled Modelling Intercomparison Project CMIP. 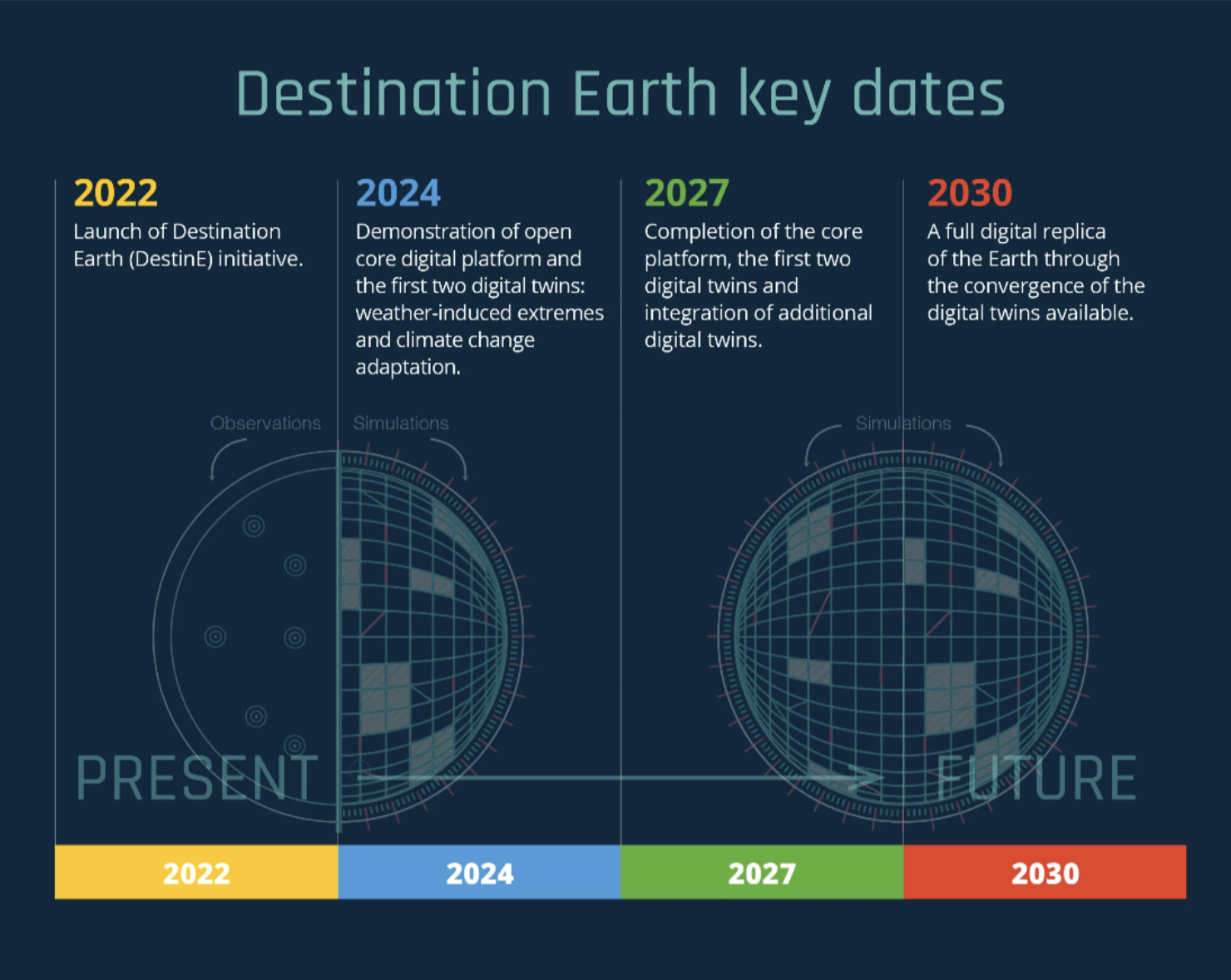 During the first phase of DestinE, the Climate DT will demonstrate 5-km, multi-decadal simulation capabilities developed in tight cooperation with selected impact sector users to show a step-change in information quality and accessibility. The first phase will also assess the system's quality and quantify uncertainties through observations.