The scientists from Aalto University (Finland) and Amherst College (USA) have managed both to observe and tie a quantum knot first time ever in the world. In practice, the knots exist in the quantum-mechanical field, also known as a Bose-Einstein condensate.

– Everyone knows that knots are a part of our everyday life. For thousands of years people have been able to tie knots on ropes. But never before has one been able to create a knot in quantum fields, even though for decades, physicists have predicted that they exist, and though there have been hopes that someone would be able to make one, says Professor Mikko Möttönen from Aalto University.

The scientists knotted solitary waves, or knot solitons, in the quantum-mechanical field describing a gas of superfluid atoms. The created quantum knots exist in a field that assumes a certain direction at every point of space. The field segregates into an infinite number of linked rings, each with its own field direction. 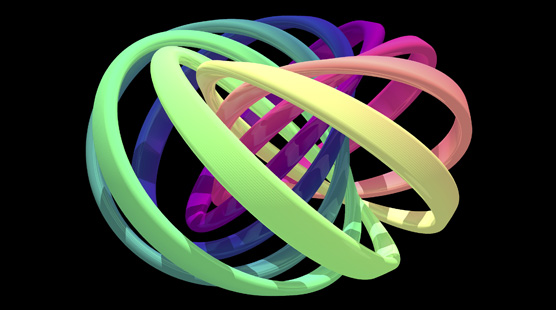 From knots to applications?

There is no direct applications for quantum knots, yet. However, Möttönen believes that in the future the finding can inspire cosmological research or perhaps, the development of a topological quantum computer.

One idea of how a quantum computer could be constructed is based on tying different kinds of knots or braids. A particular braid type would correspond to a specific calculation.

– Of course I do not claim that our knot would be similar to the one required in quantum computers, but it is in general, the first knot ever created in quantum matter. The big news here are that now quantum knots have been both observed and created, and they have been numerically simulated with the computers at CSC. We have a theoretical model and an experiment, and they match impressively well without free parameters, Möttönen sums up.

Simulation is a crucial part of the research

Simulations carried out with CSC's and Aalto University's computers are an important part of the research. It helped in predicting if a knot would actually be created in the experiment and if so, what would it look like. By comparing the results of the simulations and the experiments, the formation of the knots could be confirmed.

– Later the knotted structure was visible to us solely by looking at the experiment results, says Professor Mikko Möttönen.

– People may think that why would they need a new supercomputer, can't they just wait longer. While the computer is processing, one can do something else. But that's a wrong impression. The faster we have results, the faster we obtain feedback, and the sooner we get the final answer.

– This is a wonderful result after a long period of hard work. For years we have collaborated and now we collect the rewards. Although, at the moment we master this experiment much better than anyone else, my message is that someone can do this a lot better in the future. This is not for the end of the knot research, instead we clear the way for many new experiments and innovations.

The results have been reported on Monday in a valued physics publication Nature Physics. See the video to get more information about the research.