A doctoral dissertation taking place today at University of Jyväskylä, Finland, shows successful computer simulations that were able to predict the atom-precise structure of a cluster comprising 11 gold atoms. Later, the compound was observed to speed up decomposition of carbon dioxide. In his research M.Sc. Sami Kaappa used computer simulations to study properties of nanosized particles.

The calculations were run in Finland on CSC's Sisu supercomputer, and Spanish Barcelona Supercomputing Center's Mare Nostrum supercomputer as a part of PRACE Research Infrastructures Nanometal's project.  The results can be used for instance in developing catalysts.

Gold and silver nanoclusters can accelerate various chemical reactions. Kaappa, a theoretical physicist, investigated nanometer-sized gold and silver clusters in his doctoral dissertation. Such species have diameter of about one hundred thousandth of a thickness of hair.

– Speaking of nanoclusters, we usually mean relatively large molecules with a nucleus consisting of dozens of metal atoms, protected by monolayer of organic molecules so that the structure is stable in solution. Typically, the protecting layer consists of sulfur or phosphine ligands, Kaappa describes in University of Jyväskylä's press release.

– Using simulations, we can predict possible chemical structures even if there is only a little experimental data available, Kaappa tells of the methodology.

One of the most remarkable findings of the dissertation research was the structure of a cluster with 11 gold atoms. The work was done in collaboration with experimental groups in Canada and Japan.

– The experimentalists were able to synthesize and realize the gold-11 cluster, but the atom-precise structure could not be determined at that point. Using computational methods, I could determine some possible structures, of which a single one seemed to be more favourable than others. Later, the experimental work verified this prediction, Kaappa says.

In the same study, they found that the decomposition of carbon dioxide is accelerated in the presence of the cluster.

– In the cluster, one of the phosphine ligands is exchanged to carbene, which is a new type of ligand in clusters. The kinds of observation of the catalytic activity may contribute to development of new technologies, such as catalytic converters or innovations in recycling harmful compounds. This is also fascinating for a theoretician since the reaction of carbon dioxide to carbon monoxide is still not known in detail, Kaappa concludes.

The dissertation is published in the JYU Dissertations. 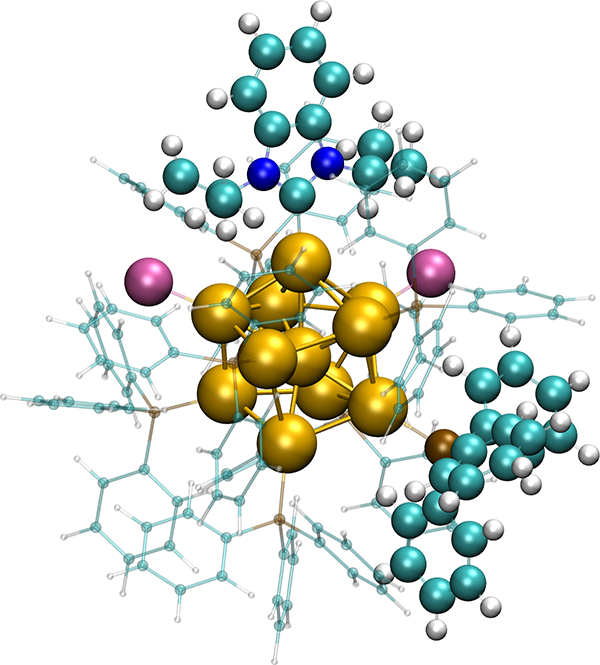 Computer simulations helped to predict the atom-precise structure of a cluster comprising 11 gold atoms. In this image is a N-heterocyclic carbene protected gold cluster that electrocatalyses decomposition of CO2. Image: Sami Kaappa, University of Jyväskylä, Finland.