The digital data and artificial intelligence revolution will transform the world of work, believes Pilvi Torsti, State Secretary at the Ministry of Labor.

– Some present-day professions will disappear, some will change, and around a third of the labor markets of the future will consist of tasks that we are not yet able to imagine.

Torsti participated on Thursday 24 October 2019 in a panel discussion organized by Aalto University and held in Espoo as part of the plenary meeting of the Research Data Alliance. The theme of the discussion was data as a force for change. The discussion was moderated by YLE journalist Heikki Valkama. 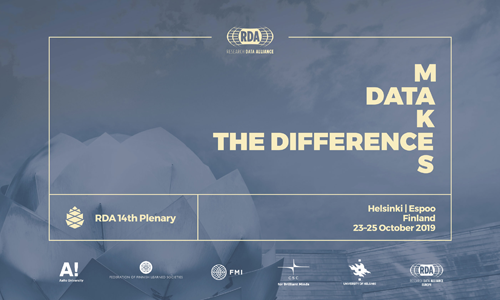 –  It can be difficult for us decision-makers to recognize the size and significance of change, even where there is interest in this. I consider one of the largest questions to be leadership: we don't have a ministry or a minister, for example, which provides clear-cut leadership to data policy, Torsti points out. She highlighted the discussion about the administration of personal data in the Finnish MyData service as an example of change leadership driven by civil society.

Shaping laws in a changing world requires politicians to be both well-informed and patient. The legislator does not function well as a pioneer of the technological revolution.

– Politicians should not make laws until they have understood the phenomenon in question, emphasized panel participant Eva Méndez, Chair of the Open Science Policy Platform.

Panelist Alexander Törnroth of Finland's Artificial Intelligence Accelerator (FAIA) mentioned that he had just returned from Brussels, where the new President-elect of the European Commission Ursula van der Leyden has promised to put forward a proposal for regulation on artificial intelligence within her first 100 days in her new role.

– Artificial intelligence cannot be regulated as a single entity; it is too complex a phenomenon, Törnroth said. He is nevertheless hopeful about the development of EU regulation.

Pilvi Torsti reminded the audience of the power of education and training in a constantly changing world. Eva Méndez was of the same opinion.

– We speak of digital natives, but when I was a small child we had books at home, and I knew how to turn the pages. But that didn't mean that I knew how to read.

The science community must also be able to learn new things, because we are on the brink of a scientific revolution.

– Before, saving a gigabyte of information would cost a million dollars. Now it costs two cents, pointed out the panel's fourth member George Strawn of the US National Academy of Sciences.

According to Strawn, openness has played a key role in this transformation. He also said that research data should not be allowed to slip into the hands of commercial interests, as has happened with science publications.

The 14th biannual plenary meeting of the RDA, which was established in 2012, will run until 25 October 2019 in Otaniemi, Espoo. Under the title ‘Data Makes the Difference', the event digs into the potential of data for decision-making and resolving societal challenges.

The event is being organized jointly by Aalto University, CSC – Finnish IT Сentre for Science Ltd, the University of Helsinki, the Finnish Meteorological Institute, the Federation of Finnish Learning Societies and the RDA Europe project.

The largest funders of the RDA are the European Commission, the US National Science Foundation and the Australian Government. The RDA's membership is composed primarily of researchers, experts in research administration and research services, science publishers and decision-makers involved in shaping scientific policy.