Since early on, there has been a debate as to what physical processes are involved in the growth mechanism of dense amorphous carbon films, which contain a high degree of tetrahedral diamond-like carbon atoms. These films have excellent mechanical properties resembling those of diamond and are, therefore, of great industrial and academic interest, for example in supersport motorcyle engines or in coatings of artificial hip joints.

Because of the impossibility to study the atomistic picture of film growth experimentally, many efforts have been made during the last 30 years to provide an explanation based on computational simulation. Unfortunately, due to the limitations of classical potentials, which are computationally efficient, but lack accuracy in describing bond formation, on the one hand, and the high computational cost of ab initio methods, which could describe the flexible bonding environment, on the other hand, these efforts have failed to provide definitive answers.

The commonly accepted explanation behind tetrahedral amorphous carbon growth is the "subplantation" mechanism, where a colliding atom penetrates into the surface and causes local stress. This is based on indirect experimental observations and, to some degree, speculation. 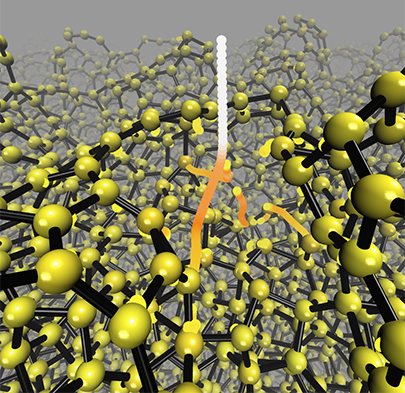 Amorphous carbon surface (yellow atoms) being hit by a fast carbon atom whose trajectory starts as white circles and gradually turns yellow with decreasing velocity. Collision to surface carbon atoms knocks few atoms out of their positions exerting local stress on the material.

Miguel Caro from Aalto university, Volker Deringer from the University of Cambridge, and their research groups collaborated to solve the long-standing challenge of simulating the growth process which leads to the high degree of sp3 hybridization responsible for the tetrahedral local structure which is observed in dense amorphous carbon films.

While machine learning approaches applied to physics, chemistry and materials science have been a trending topic for some years now, so far most studies have been restricted to proof-of-concept and validation work.

In this work, the authors present machine learning as an extremely powerful tool to solve compelling physical problems and take a quantum leap in how atomistic simulations can be used to understand and predict the properties of complex materials.

Growth predominantly via the "peening" process

The work employed a state-of-the-art machine learning based interatomic potential, a mathematical function to calculate the potential energy of a system of atoms with given positions in space. The authors performed large scale molecular dynamics simulations where the film deposition was reproduced by studying the effect of atomic impacts one atom at a time.

Thanks to this detailed and highly accurate simulation, the growth mechanism could be elucidated to take place during deposition of energetic ions leading to the formation of sp3-rich films.

The GAP machine-learned potential used in this study bridges the gap between the speed of classical interatomic potentials and the accuracy of density functional theory. Based on the results obtained for amorphous carbon with this new simulation framework, the authors challenge the subplantation theory. They present compelling evidence that tetrahedral amorphous carbon grows predominantly via the "peening" process, whereby sp3 carbon is formed away from the impact site of the incident atoms due to pressure waves and as a result of a delicate balance between bond creation and annihilation.

The authors have made several animations of their simulations available. Sit back and observe how energetic carbon atoms slam at the amorphous carbon film surface inducing complicated rearrangements in the film structure. 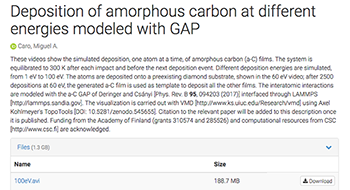 Dr. Deringer received a HPC-Europa3 grant to visit Dr. Caro at Aalto University and the work made extensive use of CSC's computational resources.

This work has been performed under the Project HPC-EUROPA3 (INFRAIA-2016-1-730897), with the support of the EC Research Innovation Action under the H2020 Programme.