An international research team succeeded in creating ductile glass, which will not break as normal glass does, but rather flex and stretch. Photo: Adobe Stock.

An international research team succeeded in creating ductile glass, which will not break as normal glass does, but rather flex and stretch. The team, which combined experimental and computational methods, included researchers from Tampere University as well as France, Italy, Austria, Norway and the United States. The study was published yesterday in the prestigious Science magazine.

The research team produced ductile glass from aluminum oxide (Al2O3), which is a well-known glass material and extremely common mineral in the Earth's crust. In simulations, researchers found that the movement of atoms - viscous creep at the atomic level - explains how the glass can deform without fracturing.

– We simulated tensile, compression and shear tests on the model structure for systems consisting of tens of thousands of atoms on a timescale in nanoseconds. Based on these atomic-level simulations, we analyzed tension and elasticity in the system and monitored the movement of atoms in the material. These simulations showed us that the plasticity of this glass material is explained by the viscous creep mechanism at the atomic level, where atoms are constantly moving to adapt to external stresses, explains Jaakko Akola.

The modeling was done jointly by materials science and computational physics research groups at Tampere University. Researchers used classic molecular dynamics, LAMPPS software and CSC supercomputers Sisu and Taito in their modeling. The simulations were conducted by Janne Kalikka, while Professor Jaakko Akola and project coordinator Erkka Frankberg participated in the simulation planning. In addition to serving as a professor at Tampere University, Akola also works at the Norwegian University of Science and Technology (NTNU) in Trondheim. Frankberg also does work at the Italian Institute of Technology (Istituto Italiano di Tecnologia).

The main experiments were performed using specialized test equipment, which was placed inside a transmission electron microscope in Lyon, France. Equipment in the new Tampere Microscopy Center (TMC) was also utilized in the study. 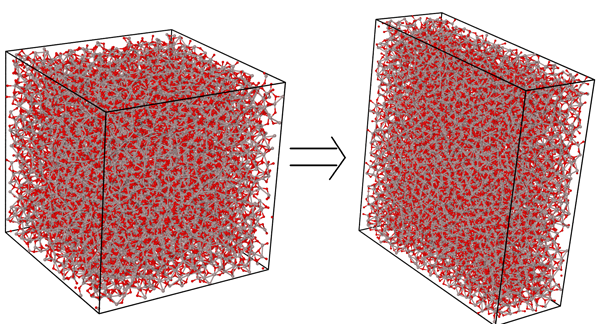 Beginning and end structures in one simulation. In the simulation, an amorphic Al2O3 structure was compressed from one direction to half of its original size. In the figure, aluminum is indicated by the gray spheres and oxygen by the red spheres. Photo: Janne Kalikka, Tampere University.

– Getting aluminum oxide into a glass-like form is extraordinarily difficult. Conventional glass manufacture won't work with aluminum oxide, because it wants to be in a crystalline form. The solution to this is rapidly cooling it down from a high temperature so it won't have time to crystallize, explains Erkka Frankberg, who headed the research consortium.

The researchers used pulsed laser deposition to change the aluminum oxide into a glass-like form. Producing ductile glass is an extremely difficult process. According to Frankberg, the manufacturing technique must be further developed before the new type of glass can be manufactured on a larger scale.

– This is just the beginning. We demonstrated that the mechanism works. The next step for us to take is to find out why some glasses don't behave this way. Conventional glass doesn't exhibit this kind of behavior. We're beginning to figure out what other types of glass exhibit plastic properties, explains Frankberg.

The development of plastic glass materials can lead to a wide variety of innovations in the future. For example, the use of tougher glass for smartphones would prevent screen breakage.

Innovations might also be discovered in completely unexpected areas. We might not even be capable of envisioning all the possibilities of glass because we are so predisposed to considering glass in terms of its fragility. If glass were to be considerably more durable than it is now, applications for it could be found in entirely new areas.

The strength of new ductile glass is many times that of steel. In addition to this, glass is also significantly lighter than steel, which might open new doors in the future, such as in mechanical engineering or, more commonly, in construction. According to a Tampere University press release, "(m)odern applications of glass are often hidden from plain sight in electronics, renewable energy production systems, space applications and battery technologies.

The level of durability achieved by the researchers may open up new perspectives for research on a broad range of technologies."

– But, research takes time. Now that we have discovered this glass, it will likely take decades before it can be produced on an industrial scale. This is often the case with materials engineering. But, if a material is genuinely useful to humans, it will end up being used for thousands of years, just as glass has been, says Frankberg.