Editors
Suomeksi In English
Back

The network that linked Finland to internet is updating: digitalizing routines at higher education institutions rely increasingly on a reliable high-speed network

Even though the road taken by the Finnish University and Research Network (Funet) has been bumpy at times, its formation and development can be considered a Finnish success story.

During Funet's 35-year history, communications technology and the Internet have gone through several major changes. Modem connections running at speeds of just a few tens of kilobits per second have increased by a million times, evolving into paths of light that carry data at speeds of tens or even hundreds of gigabits.

"This is a first test"

At first, there was suspicion. At the end of the 1970s, the necessity of a data network was not entirely understood in Finland. By the 1980s, the idea had had some time to ferment. By the end of 1983, the Ministry of Education launched the Funet project, whose purpose was to coordinate the development of a communications network that connected universities.

Five years later, the project had progressed to such an extent that, on Monday, 21 November 1988, the following had been confirmed: the line to the United States was now up and running. At the same time, on the American end, a router line card to which the line would eventually be connected was being sought.

On Thursday, 1 December 1988, the first routing test was conducted, running IP packets between the Nordic countries and the internet that existed at that time, i.e. to the NSFNET and Arpanet networks.

An entirely new door to the commercial network had been opened to Finland through the shared higher education institution network. The following message can, indeed, be considered the birth of the Finnish internet:

"This is a first test, please disable if there are any problems. We now have 250 more nets in the RIP updates, that's about 10 packets being broadcast every 30th second..."

According to one source, the connection would have only been in use for a few weeks, when an attempt was made to crack into the United States Department of Defense system from a computer at the Helsinki University of Technology. The connection made through NORDUnet, a collaboration between the National Research and Education Networks (NRENs) of the five Nordic countries, was shut down for a week.

After this incident, Funet management had to do its best to convince everyone that the breach was just an extraordinary, one-off event. 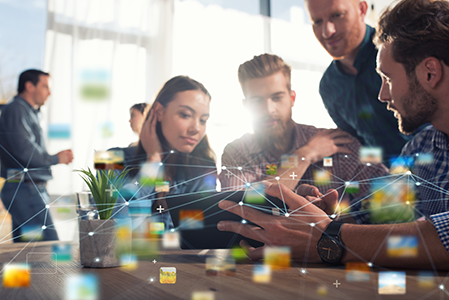 The road to world renown

Since its inception, Funet, which is managed by CSC IT Center for Science, has undergone several generational updates and achieved various milestones.

For example, in 1991, a young student offered a very basic open-source operating system named Freax to the voluntary administrator of what was then known as /pub/OS. However, the administrator was not happy with the name and made the directory /pub/OS/Linux for it, naming it after the student.

The student, Linus Torvalds, also liked the new name and announced that Linux version 0.0.1 was available at ftp.funet.fi on 17 September 1991.

That announcement later became one of the world's most popular operating systems, which is used in everything from cars to spacecraft in every conceivable type of device, including sensors, androids, communications networks and supercomputers. It is also still shared from ftp.funet.fi.

The age of one Funet generation is typically 10-15 years. The Funet network is currently undergoing a generational update, whose purpose is to ensure that the network meets future needs.

The Funet 2020 project was launched in 2016, and work has progressed from procurement to building and implementation.

At the time of this writing, the new network is already up and running in the Helsinki Metropolitan Region, Lahti, Tampere and Pori as well as the areas between these cities. The network is expected to be completed throughout Finland by the end of next year, with a gradual transition from the old network to the new one.

– The new network is far more resilient and we have more connections, such as from Tampere to Turku, explains Funet Development Manager Matti Laipio of CSC.

– The new network is also faster than the old one. We can offer users faster connections more cost effectively. 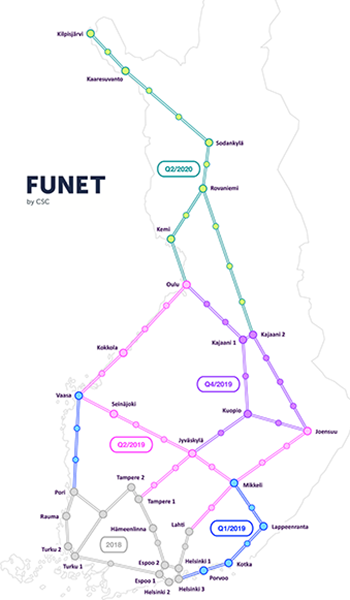 No limits to development

According to the well-known Moore's Law, the number of transistors in computers doubles roughly every two years. According to Laipio, the development of network connections follows a very similar trend, with speeds doubling over a certain period of time. At one time, video streaming services had a major impact on this. Traffic increased exponentially when people began using them.

The Funet network makes it possible for students to surf smoothly on a high-speed, reliable campus network – this is the foundation of all operations conducted over the network. The benefits of a high-speed network are emphasized particularly where researchers are concerned, as they are able to transfer massive datasets in the blink of an eye, even to the other side of the world.

In today's world, the day-to-day work of higher education institutions would practically come to a grinding halt without functioning network connections. And, in the age of fiber optic connections, there are no limits to development.

– Whereas it was possible to offer connections with speeds of 10 gigabits per second, the new system offers speeds of as much as 200–400 gigabits, eventually even getting as high as a terabit, says Laipio.

In practical terms, this means that, for example, a lecture recorded in 4K video would be transferred over a 100 gigabit connection from one user to another over the Funet network in an astonishing five seconds.

Speed is not the only factor - a great deal more is also expected of the network today. Prior to procuring the network, users were asked what kinds of connections they needed. In addition to data transfer, one of the main desires was network reliability.

– Network connections have become routine. In the 1980s, it was a whole different ballgame compared to what it is now. In those days, things were more open to experimentation - people wanted to try things out and explore different avenues. Today, everything has to work without question.

Indeed, network reliability was one of the most important aspects in designing the next generation. It was also vital that the network offer a solution for growing connection needs in response to ever increasing traffic volume.

– And, of course, technology is always changing a great deal. We made sure that the hardware and connections fully met the needs of the members. In other words, we didn't set the network up based on our own needs - we did it according to the requirements specified by the Funet members. 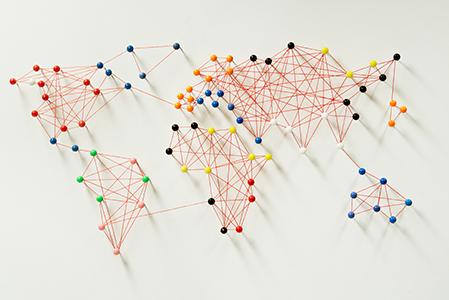 The marching order was clear. First, we would set out to update the Funet connections, so that the existing connections with speeds of 1 or 10 gigabit per second would be increased to tens or hundreds of gigabits per second. In addition to this, Funet offers the possibility of using various fiber optic connections between cities or even to the CSC Datacenter in Kajaani.

It is also possible to offer high-speed connections with foreign countries.

However, if the institution wants a faster connection, the first thing to do is contact Funet's customer service.

– Then, they can plan what speed they want and determine what the technical requirements will be. In general, this means that member hardware on the periphery of the network will require updating, explains Laipio.

Users of the new network will see the improvement in quality, which affects all users of the Funet network. Higher education institutions as well as their staff, students and researchers all benefit from the update.

The network is a backbone for multiple services

Fee-based and free services are also an essential part of the Funet network.

At the beginning of 2019, this milestone was reached – it is now possible for users at all higher education institutions under the administration of the Finnish Ministry of Education and Culture to access the network with a single, using the international eduroam roaming service provided by Funet.

According to Laipio, it should be kept in mind that the basis for many services that help to make everyday life easier is often a robust network working in the background.

– Indeed, the network is always there. You can build services on top of it, but this means that the network they run on has to be as robust as possible.

Thanks to cloud services, higher education institutions are increasingly outsourcing their services off-campus.

–The role of the network is further emphasized because critical emails or other important things or tools are no longer necessarily found on-campus, but somewhere else.

Just over 10 years ago, Paavo Ahonen wrote a history of Funet and how it had been a pioneer and trendsetter in network development. In this regard, the objective has not changed one iota.

Funet should absolutely remain an internationally competitive and respected research and education network well into the future. Communications connections are developed so that new technologies are fully maximized and the already close cooperation between the Nordic countries is deepened even further.

– We try to serve as a Nordic example to European actors, says Laipio.

– There are possibly some entirely new connections on the horizon. And because the importance of foreign connections is constantly increasing, we are doing everything we can to make them as robust and reliable as possible, explains Laipio.

The goal is to be future-proof.

An abridged version of the article was first published in Finnish in the 2/2019 issue of UAS Journal.